San Francisco has all sorts of things you never knew existed. While in the city this weekend I took part in an eating contest, navigated a labyrinth, and even visited a burned down bath house.

1. Have you ever had a taco made with sourdough bread? I didn’t think so.

Boudin Bakery was established back in 1849 by the the son of a French baker. During our visit to the pier 39 location I heard an old women ask if they had rye bread… at a place literally known for sourdough that only has sourdough.

2. The Parrots of Telegraph Hill Aren’t a Myth

I’ve heard many reason why the parrots may live in this lush area of San Francisco but no one seems to really know for sure. While we were there I heard someone say that a man let his many parrots go and they just stayed, others say they migrated on their own. I like to think that people had them as pets but the birds flew away in angst.

3. The Land’s End Labyrinth is an Easy Hike but a Hard Find

The Land’s End Labyrinth was created in 2004 by Eduardo Aguilera. They say it was destroyed by vandals in 2015 but was restored shortly afterwords. Looking at it it doesn’t look like much however, it accentuates one of the most beautiful views in San Francisco.

The garden is beautiful and has created an environment for people to slow down, take a moments and be in nature. They serve tea and other Japanese snacks in a calming sitting area. This is one of Golden Gate Park’s best attractions if only for the arched drum bridge.

5. The Sutro Baths are Like Nothing You’ve Seen Before 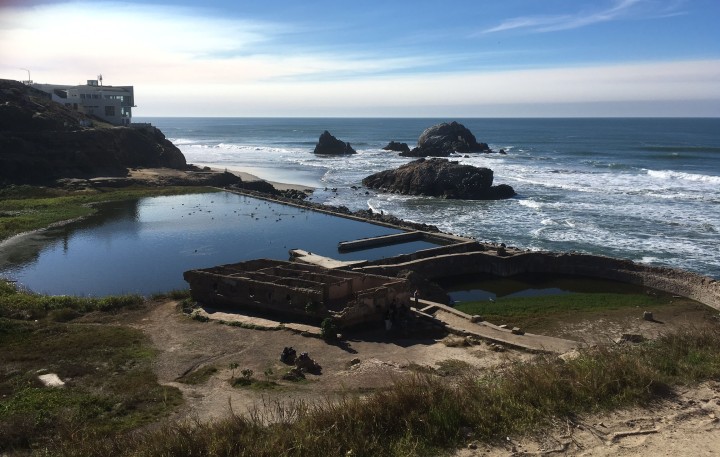 The Sutro Baths was a late 19th century establishment that burned down in the 1960s. What is left is basically a large lake, leftover concrete slabs and a man-made cave. I would urge anyone who has the chance to go here to really explore and look at all the different parts, very confusing but very fun.

6. Mirror Mazes May Not Be Your Thing But This One’s Worth It

For only $5 this maze will confuse the sh*t out of you.

7. The San Francisco Dungeon Has an Underground Drop Tower

The San Francisco Dungeon is meant to teach the history of the city through scenes and actors. It also offers moving floors, water effects, lots of strobes lights and more to make the experience fun, and it’s all underground.

8. The SFMOMA is Home to One of the Funniest and Most Notorious Pieces of Modern Art

This porcelain urinal was a huge part of the dada movement and sparked a huge amount of controversy. It has long been debated whether this is truly art or not.

9. Bob’s Donuts Has a Challenge and it is Hard

I would also suggest checking out the 16th street tiled steps (San Francisco is famous for their steps), the Seward street slides, the Esmerelda Slides, Coit Tower and all of the beautiful landmarks and neighborhoods in San Francisco.